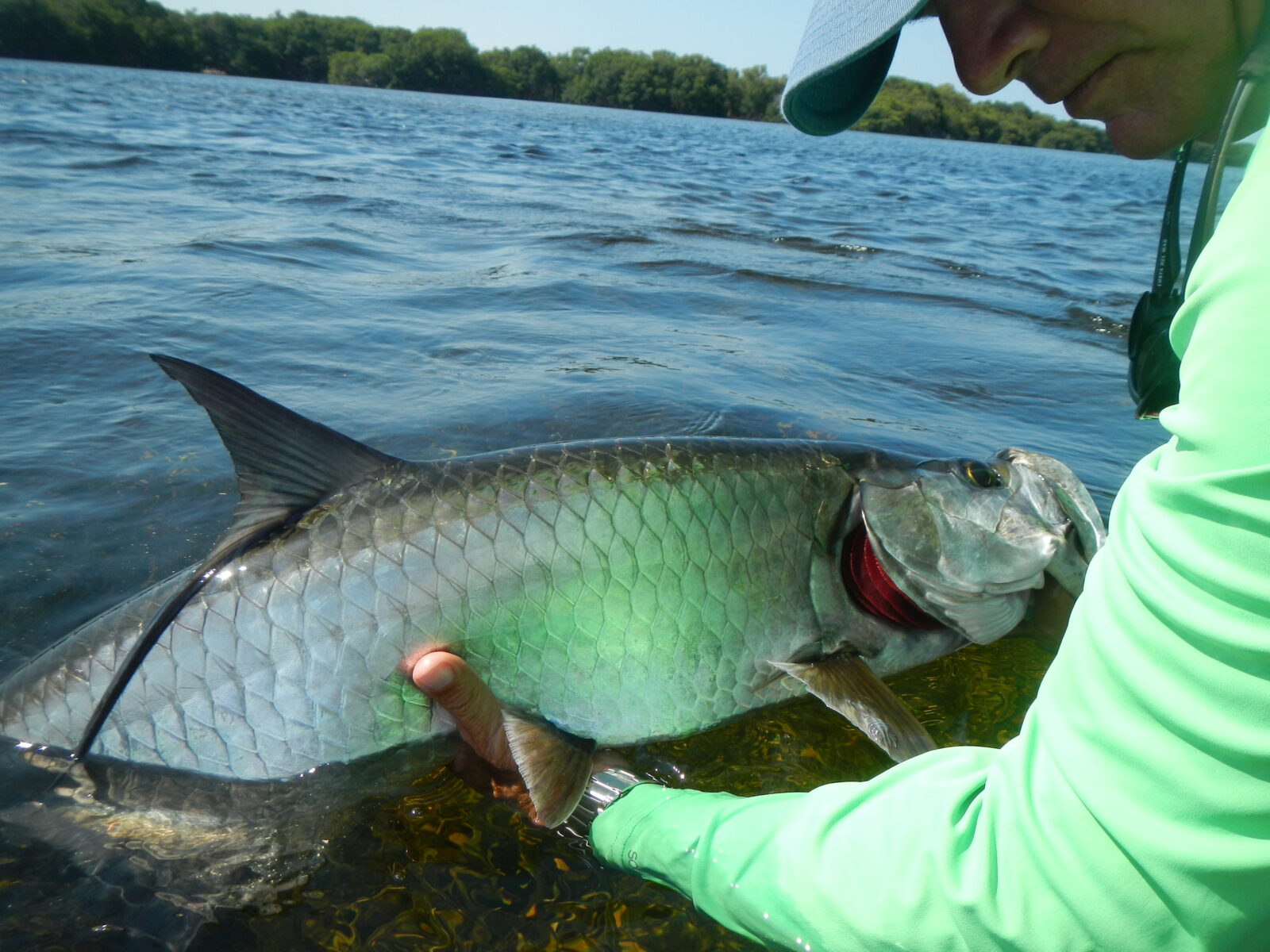 Campeche, Mexico: Tarpon Fishing and So Much More!

While others headed home after a successful Ascension Bay Permit Tournament, Miguel Encalada and I traveled five hours west to his baby tarpon operation in Campeche. Along the way we stopped for lunch at a restaurant called Dona Tere. Miguel has raved about this restaurant for years and I was looking forward to experiencing it first-hand. Expecting a small café in a cute town, I was shocked when we pulled into a rest stop along the interstate. Miguel’s recommendation was spot on. We dined on panuchos – a Yucatan specialty – which is a small tortilla cooked on a dry hot cast skillet until puffy.  The tortilla is then sliced to create a pocket, filled with refried beans, sealed and then lightly fried until golden brown. Various toppings were available including chicken, pork, turkey, eggs, pickled onions, lettuce, tomato and salsa. We started with four panuchos each, but couldn’t leave until we savored two more each. 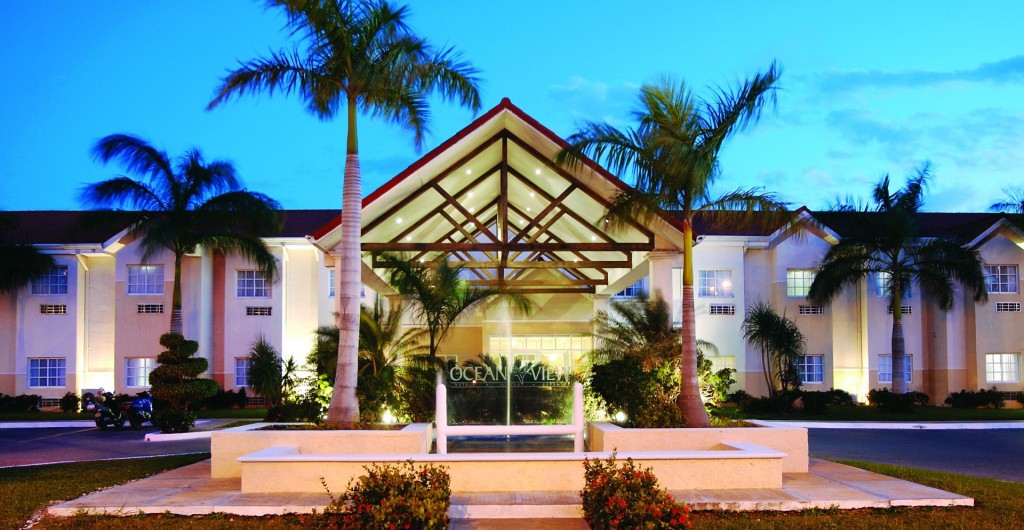 We arrived in Campeche around 2 pm. I checked into the Ocean View Hotel, which is strategically located on the city´s Seafront Boulevard. The hotel is only five minutes from the Historical Center and its restaurants and shops and a short 15-minute drive from the airport.

Across the street from the hotel is the oceanfront boardwalk. Built in 2000, the well-lit and very safe two-mile stretch has separate lanes for bikers, runners and walkers. It is a great place to relax, take a walk or a run while enjoying the sunset as the day cools. At several points along the boardwalk there are even outdoor workout stations with exercise classes containing 30 – 40 people in each class. 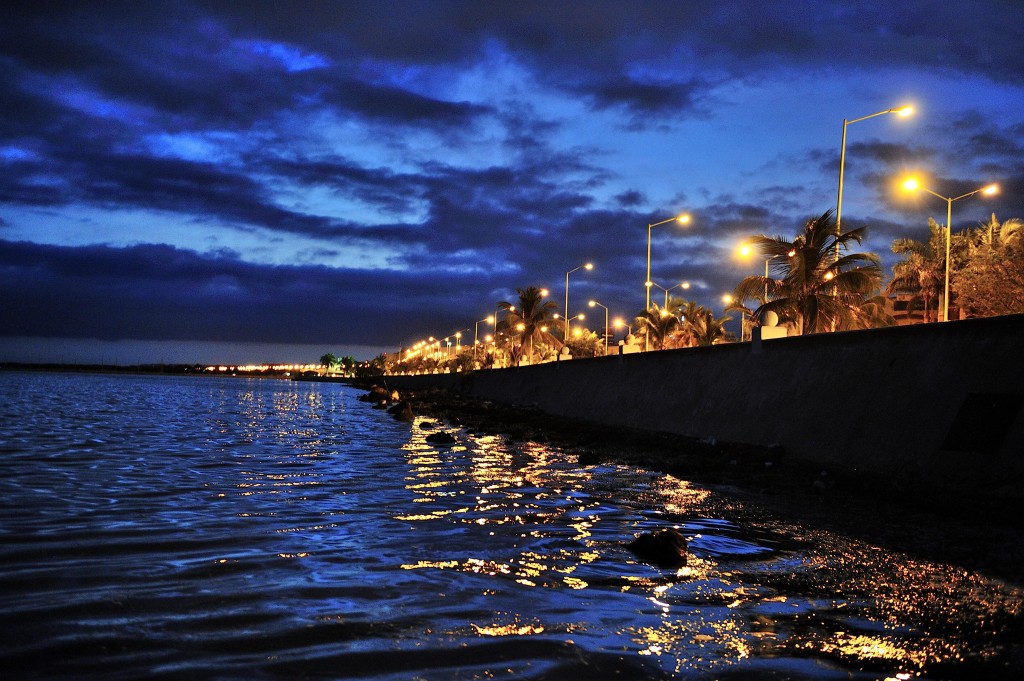 Before meeting Miguel later in the evening to take a tour of Campeche and have dinner at a local restaurant with his family, I took a walk to explore the area on my own. A UNESCO World Heritage site due to the large volume of historical monuments within the city, I found the city of Campeche to be fascinating (and I only saw a small portion of it). I also quickly learned that Campeche is the city of statues. They are everywhere. Best of all, the walled city of Old Town Campeche is a short 10 minute walk or a short and inexpensive 5 minute taxi ride from the hotel.

I met Miguel at 6 pm for a quick tour of Old Town Campeche and Fort de San Miguel, which sits high above the harbor with a moat that supposedly contained crocodiles back in the day surrounds the structure. Fascinating architecture is everywhere in the city as the government has prohibited or limited the renovation of the historic buildings. In Old Town Campeche, the buildings are particularly appealing to the eye as their fronts are painted a variety of different shades of pastel colors, blue, green, yellow and red. 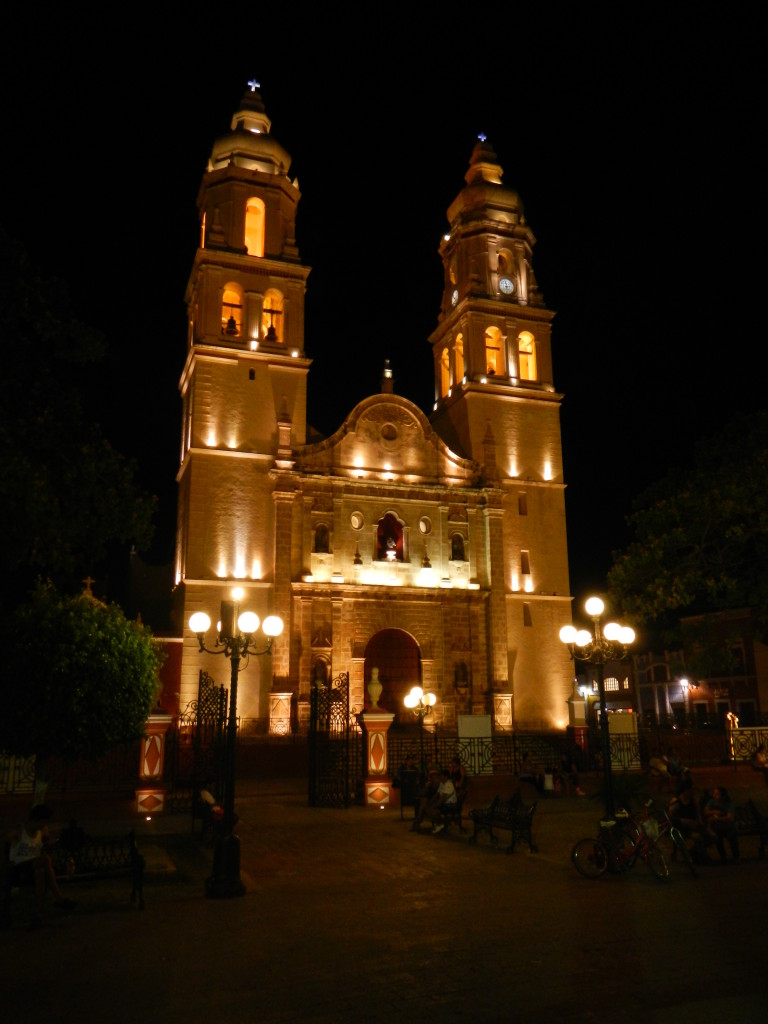 Religion is also very important in Campeche as there are various churches throughout the city. I had the opportunity to stop at the San Roman Church to see the famous “Black Jesus of Campeche.” There are two stories that I’ve heard about the statue. The first was that the statue was brought from Italy in about 1575. According to local legend, a ship that refused to carry the holy statue was lost at sea, while the ship that agreed to make the journey reached Campeche in record time. The other story I heard suggests that the ship carrying the statue sank and by the time they recovered it, the statue changed to black due to a chemical reaction with the saltwater. The local religious inhabitants associate this black Christ figure with miracles. To this day, the statue is honored on September 14 during the Feast of San Román. Worshippers carry the black-wood Christ and silver filigree cross through the streets in a solemn yet colorful event. 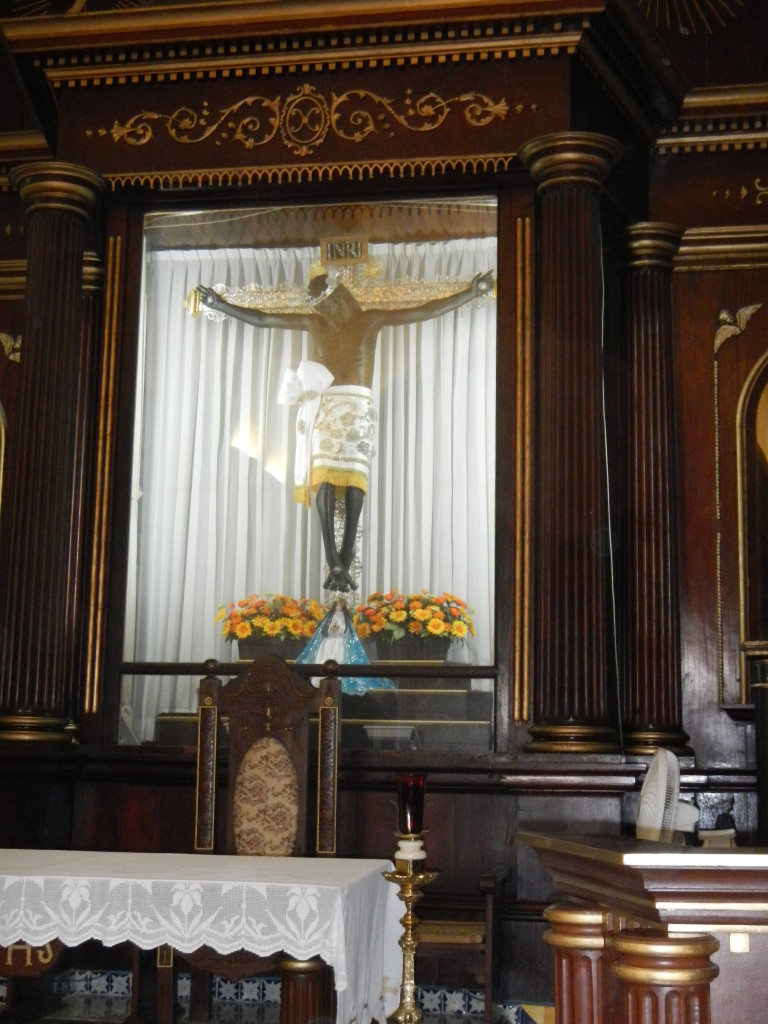 Dinner that evening was at the La Pigua Restaurant, which is considered the best seafood restaurant in Campeche. Taking Miguel’s lead, we ordered a couple of appetizers with the coconut shrimp as the standout. For dinner, I went with the grilled snook (an excellent choice) while Miguel and both of his kids had what I would describe as “one of the ugliest meals I’ve ever seen.” The dish consisted of octopus and rice mixed with the black ink from the octopus and thus resulting in an all-black meal. The concoction definitely was not appealing to the eye. However, it tasted pretty good so if you are a fan of octopus it comes highly recommended by Miguel’s family. 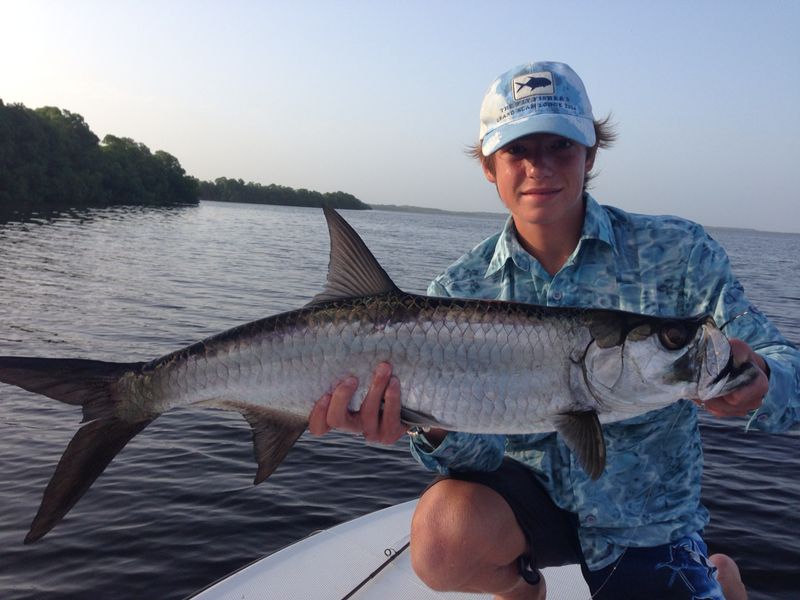 I woke up early the next morning to meet Miguel at 5:00 am for my only day of fishing. The usual start time is 6 am. However, Miguel wanted to head to an area known as Pito Loco which is about 1 hour and 30 minutes from dock and the extra hour would get us there before the sun rose.  We proceeded at a safe speed until daylight began to emerge over the horizon and once it did Miguel opened the throttle on the 115HP Yamaha motor and let it do its thing.

After speeding along for a while, Miguel decided to take a quick detour to Niyuk, another one of his many favorite tarpon spots.  Ten minutes later and seeing nothing, we continued onto Pito Loco. Once there, it didn’t take long to see tarpon rolling on the surface.  We saw a nice pod of fish departing small mangrove lagoons on the falling tide. We quickly set up in position to intercept them as they came out. 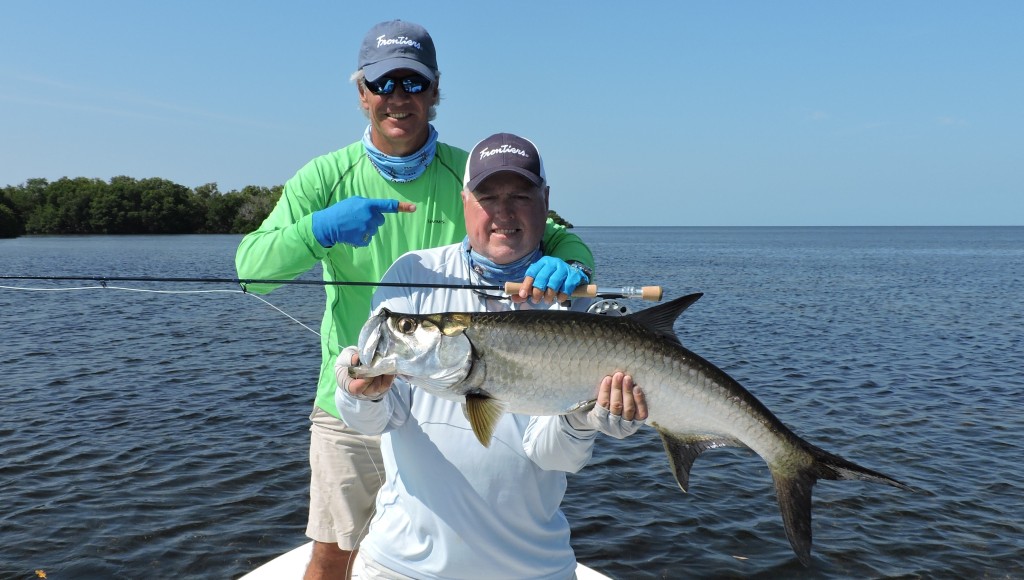 The fish were in a happy mood at Pito Loco. I managed to jump 12 tarpon and land 5 with all ranging between 5 and 15 pounds. It was a great day in my mind, but Miguel advised that it was an average day at Campeche. While we were mainly sight casting, some blind casting in the mangroves may be necessary.  You can’t describe how much fun it is when you sight a school of tarpon and make a cast and watch a fish eat your fly and then go airborne when you set the hook –  it’s awesome and definitely one of my favorite ways to spend a day fishing.  The prime season is May through September but tarpon are available year round.

That evening we went to a fabulous Mexican restaurant located in Old Town Campeche, La Parrilla Colonial. Joining us at dinner was Jorge Azar, Miguel’s Campeche manager when he is not there and his good friend, Eduardo Arceo, an excellent fly tyer and great angler. Needless to say most of our conversation centered on fishing. Miguel and I chose an excellent plate of lobster tacos for dinner while Jorge and Eduardo had Mexican shish-kabobs with a special flame-prepared sauce that was made tableside. Fantastic food and great company!

Miguel and I left Campeche around noon on Wednesday and headed up to Merida. As I stepped out of Miguel’s air-conditioned truck for lunch, I couldn’t help but feel the heat. It was hot with a high for the day hitting 106°! The restaurant, Boca Dero, reminded me of a TGI Fridays or Applebees here in the U.S.  Missing American food, I settled for boneless buffalo wings and the All-American hamburger.  Owned by Miguel’s partner the building also contains an outdoor shop specializing in archery, biking, kayaking and other outdoor activities.

Finally, I overnighted in Merida that evening and flew home early the following morning.

If you want to visit Campeche and give the tarpon fishing a try, please don’t hesitate to give me a call at 1-800-245-1950 or drop me an email and together we can put together a customized package based on your interests.